This is a comment from Jen´s aunt. She wants her brother, Jen´s father (†), to have some part of our adventure and sent an old letter from him as a comment:

“This is my addition to the comments on Aussiebaron´s Back Home!

This is a 60 year old letter from Jen´s father which he wrote from Zambales, Philippines and sent to us. It was always exciting to have a big brother like Carl-Axel and especially when he and his family lived on the other side of the globe.

That the gene is inherited is shown by YOU (and Mick). The baby on the picture is Jen, only half a year old and maybe you are waring a yellow sweater and hat knitted by your little aunt!

Life here goes on forward with some appetite wetting nerve wreckers sometimes like for example when I arranged an expedition to the burning stones. People had talked about a place with burning stones far into the jungle and described it in all kinds of ways. I thought it would be fun to go there.

One Saturday afternoon my friend Lew Adamec came into the office and I suggested he join me on my expedition. As always he was up to adventures and said yes. He was American and 43 and had been to both South America and Alaska. He suggested that we invite a geologist that was just surveying our area here in Coto. This man, 52 and 6 feet tall, was happy to join us.

Now for the tricky part. Who could show us how to get there? People talk a lot but there were actually only three people who knew where it was. One lived by the shore and two lived in the village.

We got hold of one, Moreno, a small wiry man. He wanted to bring his dogs and his gun which we said was ok since we were only too happy to get someone to show us the way to the burning stones.

The journey was only 10 kilometres but to force our way through the jungle would take approximately 5 hours. We decided to start at 6 in the morning the next day.

At six next morning we met, Moreno with his homemade shotgun, Lew with sandwiches and Joe Peopels with a bag and with geology instruments and I. Marianne had sat up until 2 o´clock at night sewing a bag that I had thought up. The bag held a coffee pot, coffee, sugar, cream, salt meat and half a kilo steak.

We followed the river upstream up the mountain as we had walked many times before but never so far. We were told we had to cross the river 11 times along the way before we reached the fork of which we were to follow the left arm north and cross that one about 20 times.

At the first crossing Moreno, the leader, took off his trousers, tied them on his back and walked across the river. We did the same, also taking off shoes and socks. The water was 5 foot deep and flowing quite rapidly. We did not find exactly the shallow part Moreno had crossed over at so we slipped and got wet all three of us and were flushed down river a bit before we managed to get up on the other side a 100 metres further down. Guess how the sandwiches looked! I lost my salt meat.

After that blunder we did not undress anymore but walked in our wet clothes and shoes.

To wander along the rivers here where the jungle grows into and over the water cannot be described. You have to climb on rocks in the water that are slippery and your balance must be its utmost. Many times we had to force through the djungel also.

After four hours of this we took our first break. We had passed the fork and ought to be close to the burning stones.

The leader had forgot where the place was and needed to go for a little scouting tour while we had breakfast. Lew´s sandwiches were dough so the dogs got that. Joe´s cans were good. My steak was well washed in water with malaria and soaked through with amoeba bacteria. But it went down and tasted good. Thought about cooking coffee but decided to wait until we arrived at the burning rocks.

After an hour the leader came back and pointed out an area in the jungle to us and said that´s where it is. He could still not exactly point it out so we just had to walk along and hope we were lucky. We followed the river which was now harder than ever since it now went almost straight upward, (The last kilometer took us about 2000 feet) and straight into green hell.

Joe left his bag before we went in.

The jungle was made up of a some trees with vines but mostly dense bamboo. Every step we had to chop our way through 2 inch thick bamboo stems that were tuffer than the devil and sharper than razor blades. Out shirts were ripped to shreds and also the khaki trousers. I had a pair of american armour trousers and they were sturdy enough.

When we had been trekking for an hour we had only gotten about 100 meters and I was ready to give up. Lew and Joe too.

The leader was not sure of the way and had to climb up in every tree to see which way we should go.

Then the leader and Lew disappeared and Joe and I rested for a while. Soon we called Lew but got not answer. Joe started to follow in their footsteps and I followed him.

Then we heard someone call from about 30 steps ahead. It was Lew. He had found the site. We ran there and o yes there they were, the burning rocks. Lew had heard a mysterious sound he followed. It was the sound of burning and lighting gas.

We had probably trudged around the area but due to the thick jungle we had not heard anything.

We sat down, tired and bloody with cuts, to rest while pondering what kind of gas was burning. While the geologists discussed this I made coffee and this was the climax of the trip!

The spot with the burning rocks is as big as 10 meters in diameter made up of stones. From underneath comes gas up and is burning and makes it look like the stones are burning. There was probably a very big mudslide once and it covered a lot of plants and growth. When this started to rot the methane was created and is slowly reaching the surface where it is burning.

The burning rocks look very impressive with the flames jumping from rock to rock through rain and storms. This spot was once and still is for many a holy place to the people here because they have no explanation for it. In 1933 there was a search party here for uranium but it was never found.

The return trip was a nightmare. Back on the river we floated along the stream whenever it would let us. At dusk we were back in the village. We were in a miserable state but happy to have seen the rocks.

Next day we had to tell our story again and again, where it was and how it looked. People who had explained thoroughly to us how to get there and what it looked like had so many questions about it. This told us that nobody had been there but only heard stories.

We all had taken a little stone each from the rocks, a small red burned stone, like a piece of brick or burned clay.

How are things at home? Summer is ending and you are taking up the boat I guess. I myself am planning on doing some sailing at the coast and shark fishing and pearl diving as soon as I am done with the jungle excursions. I am sending you a picture of me from another trip so you can see how you look when you take a break without the shirt on.

How is the filming working out? I have taken three films here already and they look good. I am now waiting for a projector so that we can watch them. After that I will send them home to you so you can watch them too. It is mostly the kids we film. Ok, time for a drink, gin and sugar. It´s raining outside so I feel a bit clammy. Marianne has toothache, the little girl got her first teeth and is crying and the boy is just whining so we’ve got music!

Thats a little about our life for this time. 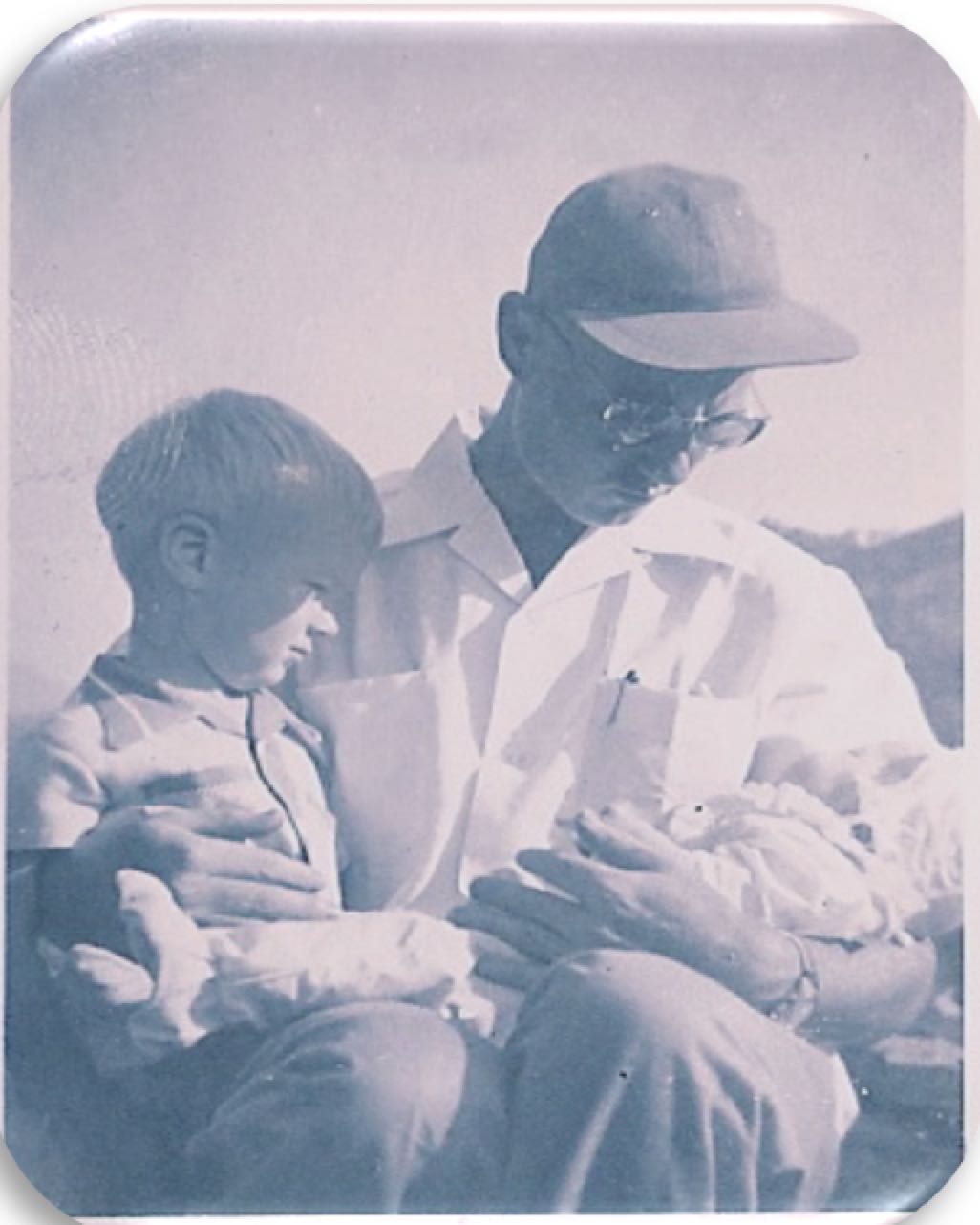 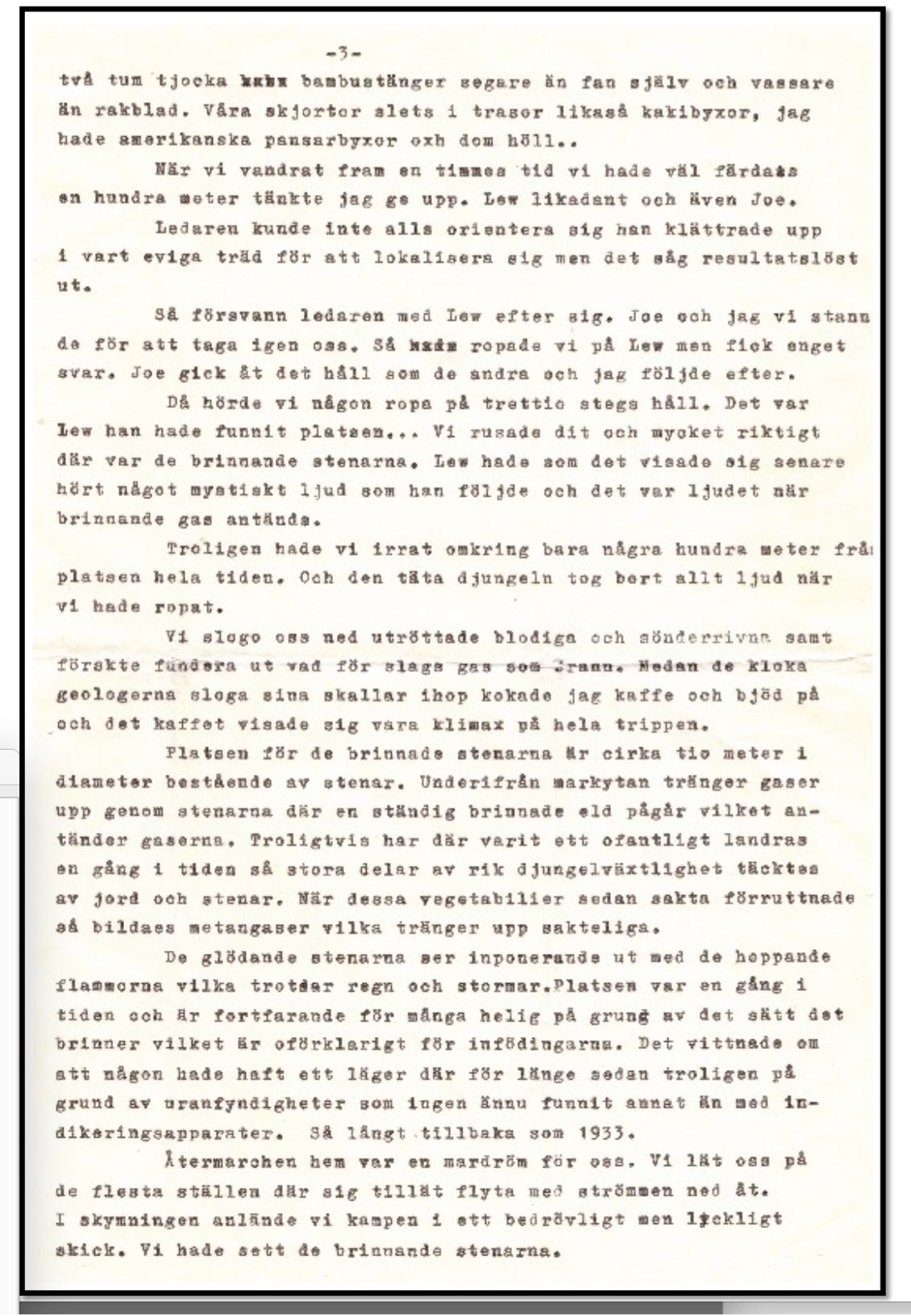 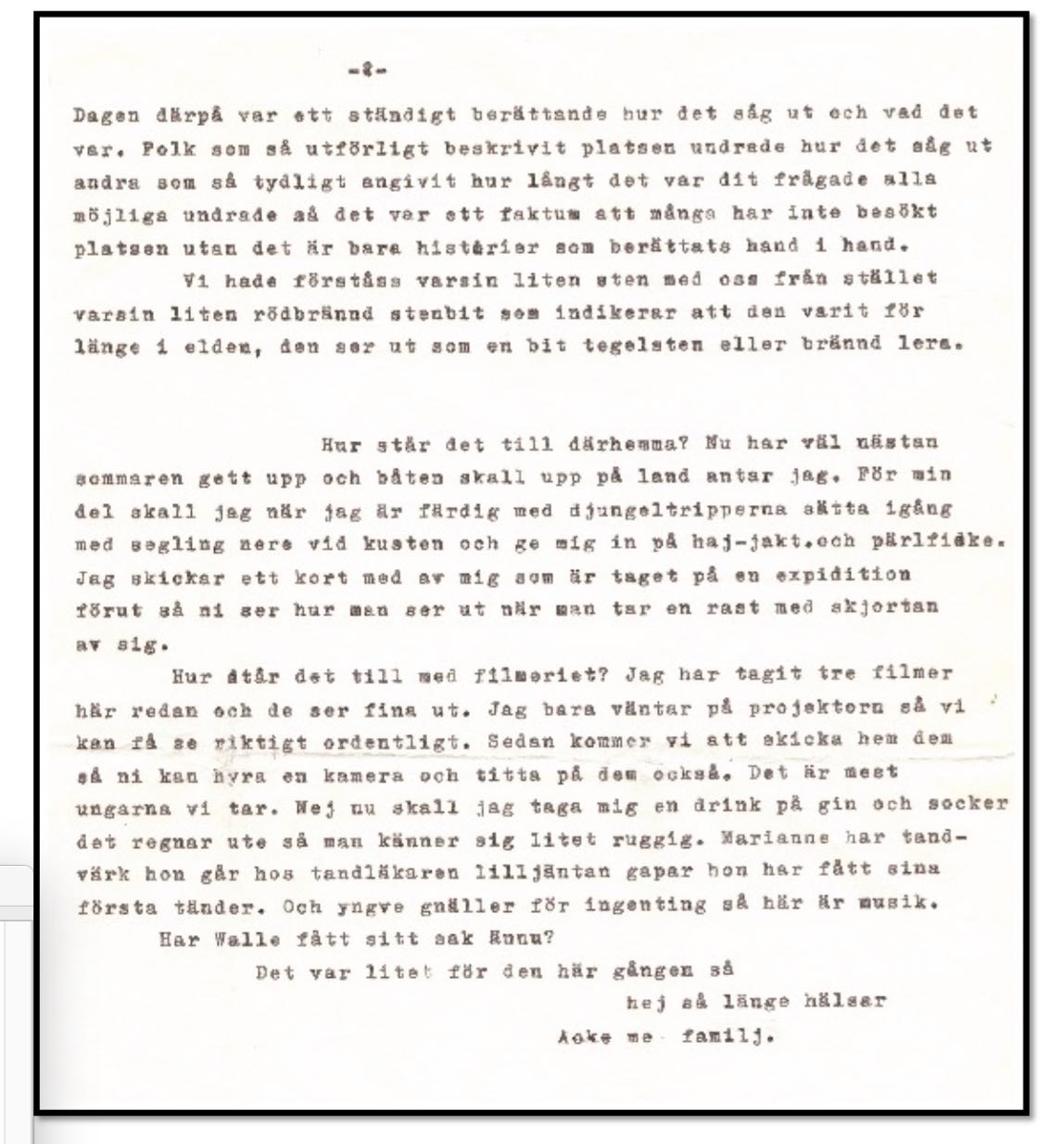