We will starve! We only have some Swedes, handful of purple beans, less green beans, one squash, two kiwanos and possibly some sweet potatoes in the patches. If we had to live only on that we would be in real trouble.

Very foggy day. Yesterday we did all fleece clothing laundry. It did not dry. Some clothing took all today above the wood fired stove to dry out. Incredible.

We decided it was Sunday today and the sun shone beautifully. We had a long breakfast in front of the fire this morning. Hung around until 10-ish. Mick did the dishes and Jen tidied the house. Then we had some morning coffee/tea in the sun. After that we made a yummy Thai lunch on chicken, leek, ginger, capsicum, squash and coconut milk with rice. After it was time for after lunch coffee in the sun. Then Mick painted the old school desk -turned -sink stand –now turned bathroom vanity. Away with all old rust and now it is silver coloured. Jen baked Lime-raisin-macadamia cupcakes. Turned out sooo yummy. After that we raked about seven x two metres of the Pecan square and searched for Pecans among the leaves. Got quite a few! Time for coffee again and some internet browsing and no more work since it´s dark. Shower, fire and soon time for dinner which will be pork and Uluru stew with pepper fried onions.

In front of the fire. 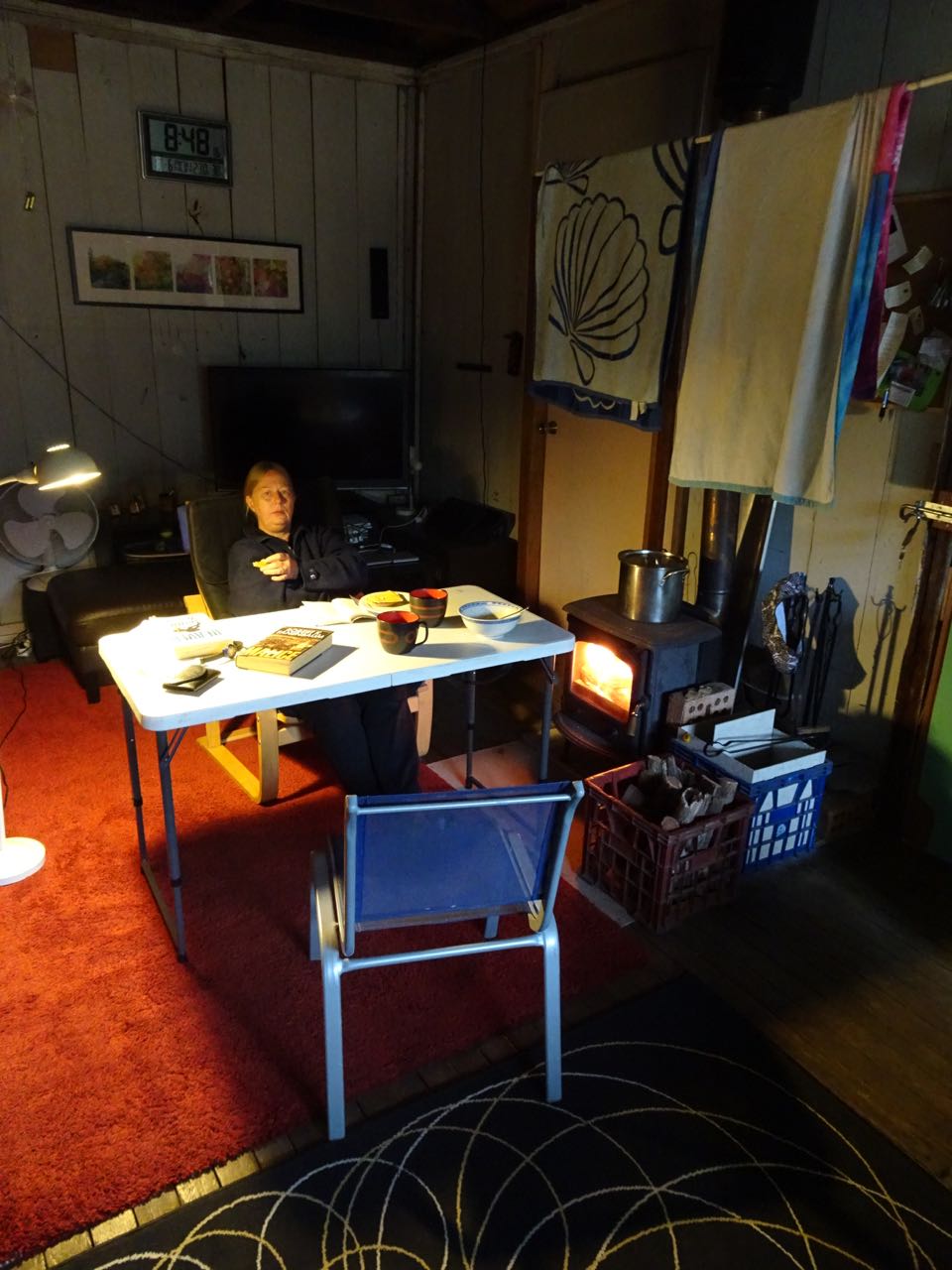 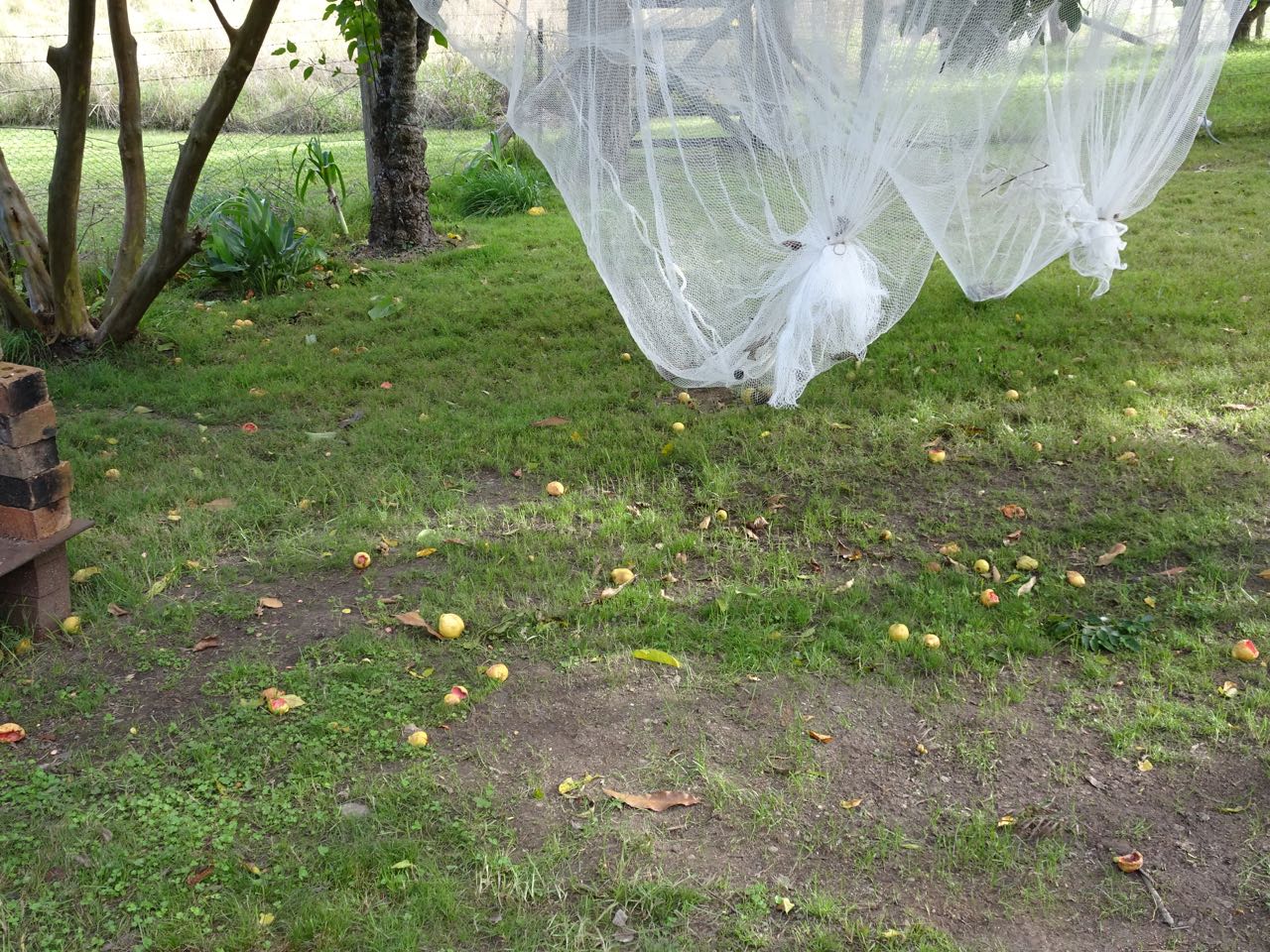 Yellow Guavas strewn on the lawn like apples in Sweden 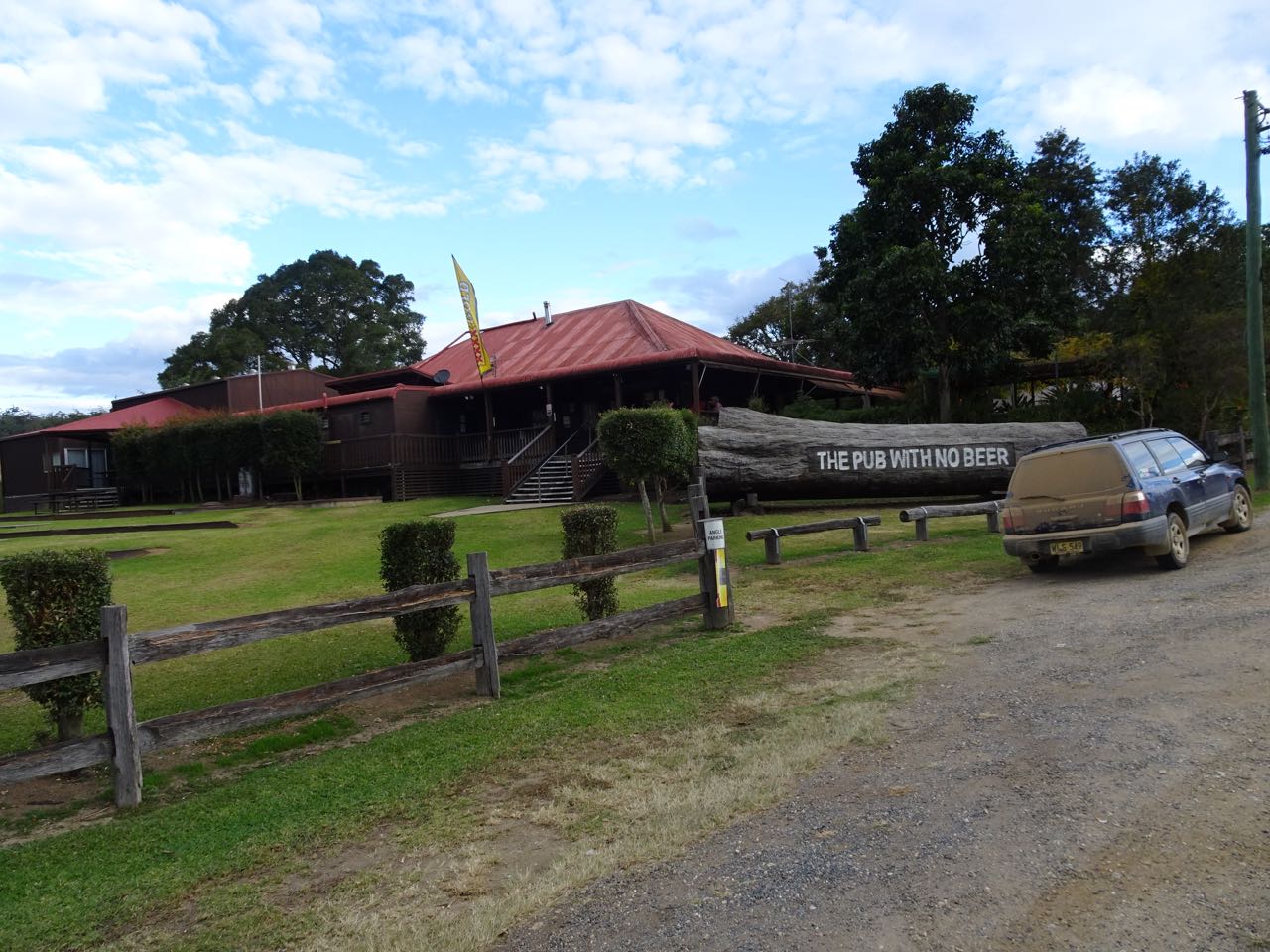 On the way home from Coffs we drove by this one in Macksville! Puts a picture to the song:

We have some rainy days. They were supposed to come in March April. Two days we are spending in front of the fire not doing much. The Yellow Guavas are falling on the ground like apples in October. We have picked our share and the Honeyeaters and possum are munching on the rest. The Small Leaved Lillypilly fruit fell off the tree, hard and green and useless. Now we are picking small Mandarins. They are like eating candy! The mice are now squeezing in through some gap in the storage room and started nibbling on the seed packets. Another Kooka  baby on the block, still together with a grown up.

Oh it´s soo beautiful out here it´s incredible. Today with the morning mist and some of the trees changing colour. The Red Cedar has a light green canopy now instead of deep green.

20160531 Tuesday. No frost. Left early. The fan went totally dead after a while on the road. Good thing maybe? Dropped off the books at the library in case we will not have time later. Mick went to his doctors appointment. He got medicin for his stomach/throat problems which we picked up at the chemists. He got no reason from the doc as to why he might have these problems. But Jen thinks it´s food related. Went to the bank to cash ATO refund checks. Still missing one of the checks. Gotta call when we get home. But it´s such a pain calling them. Have to stand in the corner of the dunny and all of a sudden the phone can go dead. They also want voice id but the machine can never hear the voice correctly. Forgot Jen’s wallet at home but all went well at the bank since we had taken our passports. Sent a letter to Marianne and two Swedish authorities. Borrowed some films and books at the library. Had a cuppa´ at Liberty petrol station. Then we drove to Coffs Harbour. Found a Subway and had lunch there. In Coffs we found a car wash to wash off our dirty, dirty ute. Then we turned in the car at Jax for new tyres. While they worked on the tyres we went to the mall across the street and had a cuppa’ and ice cream. Back at Jax they told us our front brakes were worn down totally and they could fix it. The guy said several times he did not believe it since we had not much mileage and had to check himself. We said we had service tomorrow and the guy said to tell them to fix it and if they did not we were welcome back. We went to shop at the mall again for the evening. Got a giant chocolate box, since we are celebrating our anniversary, some food to eat at the hotel because were very tired and then some sprits and searched some stores for things we needed. After that went to our hotel. That mall across from Jax was very badly planned. We had to walk around the whole tarnation to get in from the parking lot. Nice quiet and warm hotel with good wi-fi. Jen was not feeling well and had two Lemsips and went to bed. But after a while we had a bit of celebration pizza and updating of our apparatuses.

Wednesday. Up pretty early and had breakfast in our room. Then we took Atlas to Mitsubishi and told them about both the fan problem and what Jax had said about the brakes. We were driven to the mall where we spent the time shopping for things we have not found in Kemp, until we were picked up and taken back. We had tea and mini donuts and lunch and tea again. We bought earphones, batteries, got a new spring and the armband put back into Jen’s watch for free (sometimes people are very nice for no reason!), HDMI cords, socks, underware and more. At Mitsubishi they said Jax was wrong. They also took pictures of the mouse nest that had wreaked havok with our fan. We got the fan job for free!! Believe it or not. After paying for the service we went back to the hotel. After some updating we went to a restaurant and had babyback ribs and it started to rain. The restaurant was family owned and the young son was serving us and was a very very cute, good worker. Then back to the hotel to do more updating and TV. Phew! This updating business is driving Jen nuts!

Thursday. Breakfast in the suit and packed everything and checked out. Did some more shopping at Super cheap auto and bought some fuel stabilizer liquid for the machines at the house and a lamp you can carry and hang, that has a cord. Bunnings for kitchen counter backsplash and magnetlock and small drill bits. Then we did the food shopping at Woolies and BWS. Drove a bit outside town to have a sandwich lunch. This in Urunga by the river outlet. Filled the red petrol cannister at BP and on home. We had a bit of light rain on the way home but when we got home there were puddles everywhere. So a good trip on the whole but also quite stressful as usual. The celebration part always feels like a chore says Jen. We gotta think this one over better next time.